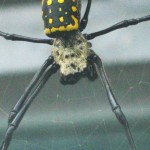 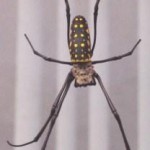 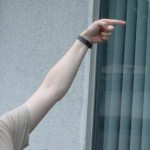 Chris points at a large spider

I was on my way into one of the buildings with some other folks here when I espied this spider.  As best I could tell it was an argiope spider.  This one was about as big as my outstretched hand.  Someone took a picture of me pointing to the spider, but I haven’t seen the photographer since.  One of the locals claimed the spider was poisonous.  I doubt it was, but all the same I stopped putting my hand near it for size comparisons.

**20080607 Update:   I found the photo my friend sent me where I was pointing at the spider.  You have to click on the photo to see it in its entirety (meaning both my smiling mug and the spider itself).

This entry was posted in "Downrange", Asia/Pacific. Bookmark the permalink.