As 1989 began, George H.W. Bush took the presidency as the Reagans rode off into the sunset. Prior to the inauguration, U.S. Navy F-14s shot down Libyan fighters over the Gulf of Sidra. On the ninth of November, Germans began to “Tear down this wall” and began dismantling the Berlin Wall, which had long symbolized the Cold War.   Operation JUST CAUSE would oust Noriega from Panama late in the year.

While these awesome historical changes were taking place, I found myself hitting many of my own personal limits. I hit the limits of my self-discipline, my academic work ethic, and my intelligence; if not my ambition. I had been clever enough to do well in high school and in my first semester in college. However, my intelligence tended to feed a sense of academic complacency. I had tendered a habit of assuming I’d accumulate all of the knowledge I needed to pass tests during the courses of the academic lectures. In other words, I grew up getting by without having to do homework. Up until 1989, anyway.

Reality gave me a very significant check, and dismal grades sent me back to the career-planning drawing board. I very nearly gave up on becoming a military officer.

I made my debut as a cadet, in both Army and Air Force commissioning programs.

Ronald Wilson Reagan (may eternal peace be upon him) was the President and Commander-in-Chief; George H.W. Bush was Vice-President; Frank Carlucci was the Secretary of Defense (but I remembered Caspar Weinberger much better). The Goldwater-Nichols Act had reorganized the military only somewhat recently and the military was still getting accustomed to the new way of doing business. The Soviet Union still existed, but the Cold War had begun to thaw.

We in the U.S. generally knew who our friends were and who our enemies were, and if we didn’t know, we didn’t think it mattered at the time. The peacetime force was enormous. The Army had 28 Divisions (of about 17,000 soldiers each). The Navy had nearly 575 ships (including three battleships). The F-4 was still in the Air Force’s inventory, and the aircraft that became the F-22 was only in the prototype development phase; the Air Force unveiled the F-117 and rolled out the very first B-2. As I recall, the force was structured to be able to handle a major conflict in Central Europe and two smaller events. The wars we would have considered ‘Smaller events’ or ‘Minor conflicts’ would have been something the size of a renewed Korean conflict.

While major events were transpiring in the world and things were about to get much better, I was learning the essentials of military life; not in the immersive way my Air Force Academy and Officer Training School brethren did, but somewhat more evenly paced, two times per week in class and in “Leadership lab.” My fellow cadets and I were learning to follow the orders we were expected to start giving in (what seemed then to be an interminably long) two years. We learned just enough about marching, uniform wear, operations orders, military writing, and the “Big picture” current structure of the armed forces to enable us to learn the critical details later. It was the late 1980s, and uniform wear was in; although some of the older officers and sergeants who’d been in service during the Vietnam era remembered when they wore the uniforms only during classes.

It seemed to be a good time to be getting into military service. What we did not see at the time was the unsteady state the world was about to become, the uptick in deployments, and the eventual mass-casualty terror attacks against civilians that would beget a new kind of conflict.

Posted in Military Affairs, USAF | Comments Off on (Ret)

Posted in Terrorism | Comments Off on This Again? 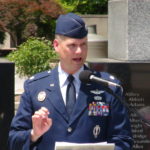 I was given a most amazing opportunity last month and the timing of the opportunity could not have been more perfect! I was offered the chance to give the keynote address at the Peoria County Memorial Day Observance on Monday, … Continue reading →

The Beginning of the End

I’ve recently learned that my request to retire from active service this summer has been approved.

Now I actually have to figure out once and for all what I want to be when I grow up! Valid (or at least humorous) suggestions are welcome in the comments section!

As I was walking back from work today I tried to think of a few quips I like to offer others. I do not have a particularly good reason for thinking about this particular topic. It does follow along the line of thought into which I fell summer 2003 when I was deployed with some of my Panton compadres to Singapore; and I thought out of sheer random curiosity to ask my friends to please “Tell me the first sentence of your favorite story.” That tale is covered elsewhere; perhaps someday I’ll republish it here. Without further ado, here are the couple phrases I like to turn:

“I’m probably smarter than you. But I doubt it.”
– Normally I rehearse in my mind saying this to folks I whom I believe are condescending. In such situations I sometimes feel like I need to push them back onto their heels a little bit with a blunt assertion of superiority. With the same breath I offer them a sort of a philosophical “Face-saver.” I’ve used this phrase a couple times, but only with people I’m certain will understand the entire phrase.

If I’m approaching the right person I’ve also had some success with the sister of the above phrase:

Me: “I have good news, and I have bad news. Which do you want me to explain first?”
Occasional Good-Natured Person: “I’d like to hear the good news first!”
Me: “The good news is that I’m a pessimist, and all I have is bad news!”
– This was met with a grinning groan, as best I remember

Posted in Humor | Comments Off on Things I Enjoy Saying

Adding to the Absurdity

One of my frequent reads over at PJ Media is fellow (former) St Louisan Stephen Green at VodkaPundit (who “Covers the absurd in American politics,” and does it quite nicely from a libertarian frame of reference). I finally got a chance to weigh in at the comment section on a short article he posted about the probable pending retirement of the Air Force’s A-10 Thunderbolt II (better known as the “Warthog” or just simply the “‘Hog.”)

The A-10 is an amazing airplane piloted and maintained by great folks, several of whom I’m proud to call mentors and friends. As of now, I don’t believe Congress has given its approval to retire the jet from the fleet; the proposal to retire it has been made by the Air Force and seems to have been ratified by the Executive branch in the 2015 budget proposal. In the VodkaPundit article commentary, I attempted to explain a couple of the reasons the A-10 is likely to get the axe. It’s an imperfect, incomplete explanation, but I felt it was best to leave it where I did.

Whether it retires sooner or later, the ‘Hog has certainly earned its place in the annals of aviation history as a close air support all-star. It will be a fitting testament to the patriotism and dedication of the Americans who designed, built, maintained, and flew it. It will be great to keep it in place for a little while longer. But when its time comes, I hope it retires with its record intact.

There have been precedents for obsolescent technology hanging on just a bit too long, to the detriment of the system as a whole. For the most recent examples, take a virtual tour of the Saddam-era Iraqi Air Force; or walk the ground of the Beka’a Valley circa June 1982 (if you dare), and try to not let your feet get cut on the shards of the decimated Syrian Air Force. Granted, the technology in those instances was operated poorly. But fleets of third generation fighters with support from single-digit surface to air missile (SAM) batteries were no match for well-flown fourth generation fighters.

Aviation history is ushering in its fifth generation fighters. The sixth generation went onto the drawing board several years ago. The historical lesson needs to be taken to heart. The A-10s time is nearly spent, along with the rest of the fourth generation jets.

I’ve seen a lot of jets that were fine for their time flown one last time to Davis-Monthan Air Force Base’s “Boneyard.” It was the right thing to do, even if it was a little sad to know that birds like the Phantom, the Corsair, the Intruder, the Raven, and the Tomcat put their gear down for the final time.

One final “Base, Gear, Stop” radio call to D-M Tower is certainly better than the alternative radio call in combat.

The Genesis of No Twelve-Step Program

Just in case anyone happens to click over here from the Ace of Spades blog comments section: I was just kidding, I don’t actually have a Twelve-step program that helps transition lurkers into commenters.

Posted in Humor, Internet | Comments Off on The Genesis of No Twelve-Step Program

I want to say “Thank you” to whomever purchased this 2014 Camaro COPO (Central Office Production Order) at Barrett-Jackson.  (Image Credit (as best I can tell): Copyright 2014 Drew Phillips / AOL 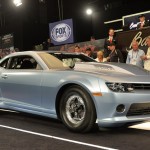 There look to have been other charity auctions there.

I can’t wait until I get to attend another Barrett-Jackson auction! It’s been a long time.